The most influential woman in arts and culture in South Africa shares what she’s learnt about resilience, humanity and, above all, about the power of her voice and the music in her soul.

You know when Artscape Theatre Centre CEO Marlene Le Roux is in the house. You might not immediately see her in a crowd – she’s short – but you’ll sense the buzz around her. She’s the one with the bright red lipstick and radiant smile, the infectious laugh, the big personality.

A mother first, Marlene is also a singer, musician, business executive, author, motivational speaker and philanthropist – not necessarily in that order. She’s also a campaigner for human rights, specifically with regard to women, children and the disabled. She can relate. Marlene grew up ‘dead poor’ in Wellington in the Western Cape winelands and contracted polio in her infancy. She had a cubicle in which to store her things and slept in a three-quarter bed with two others. She was an only child, but grew up in her grannie’s house. ‘Wellington gets to 40 degrees in summer but in the midst of this we could dance, we could sing, we could be happy. It’s not just about misery; I want to make that clear. I learnt how to survive from my mom, a factory worker, and my grannie, a domestic worker and mother of 10 children. It’s about resilience.’

Marlene spent her childhood visiting doctors at the Princess Alice Home and Orthopaedic Hospital in Retreat. ‘We used to get up at 4am to catch the train to get there by 8am. It smelt like dirt. It was “whites only” and “blacks only”. The two women from the community who accompanied me would sit, wait, and never complain. When it was our turn, the doctors wouldn’t even acknowledge them, as if they were invisible.

‘I experienced the harshness of apartheid from a young age. I learnt to survive people’s attitudes, discrimination and insensitivity. There was no time to throw a tantrum, no opportunity to say that I don’t eat this or that in a house where there were sometimes 14 people. And I lived with pain every single day.’

And yet, Marlene says, she lives a miracle. The 50-year-old mother of Aimee, 21, and Adam, who passed away in 2017 aged 15, calls herself a privileged woman. ‘I am the CEO of a company. I have a job. You can’t see me as disadvantaged but I’m disabled. I talk about equity and equality. I can only be equal to you if I have my brace on and my brace costs money. You can’t talk about equality if you don’t break down equity.’

Still processing the death of her cerebral palsy son who could neither speak nor see, regrouping after a recent divorce and recuperating from shoulder surgery, Marlene soldiers on. ‘Polio is about weakness of muscles. It’s just wear and tear. I see too many people who suffer more than me.

It’s important that I become healthy for Aimee, that I can be a mother for her. She grieves just as much as I do.’ Supported by a good medical team and a ‘brilliant’ staff at Artscape, she’s currently overseeing renovations to make the facility more accessible for the disabled and the elderly. ‘What people don’t understand is that we don’t get money from government for the arts; we get money to run a building. It’s not a game – it’s a navigation. We must raise funds by hiring out our venues, with their highly acclaimed technical staff and world-class infrastructure.’

Marlene describes her job as ‘everything beyond the arts’. It’s about health and safety within the theatre complex, achieving transformational objectives (including skills development), and creating a sense of community for all those who ‘come to see the magic’. ‘We run a huge education programme with the Western Cape Education Department.

Our goal is to have a mix of young people here, to construct new communities without making assumptions about each other, and to experience what it is to have respect and dignity,’ she says. ‘Some people have trouble with my frankness but I am not prepared to lead indecisively. I’m very people-oriented. I work a lot with respect and I listen. Family comes first – children come first – because I know my staff will give me 150 percent. You can have all the governance principles, all the core values – it’s bullshit. The value is when you start to care for people.’

Marlene first joined Artscape as director of audience development and education in 2001, becoming the first person of colour and the first woman to be appointed CEO of the organisation in 2015. Typically outspoken, there’s nothing complacent about her manner or approach. ‘I don’t say that I feel pretty and this post is forever. Everything’s about politics in South Africa. I don’t take things for granted. But I use Artscape as a vehicle to introduce communities to each other. I want this place to be a space of healing, where you can just be, and not be put in a box.’

Among Marlene’s career accolades are the Commonwealth Points of Light Award granted by Queen Elizabeth in honour of her inspiring voluntary work, the German Africa Prize for services to peace, democracy and human rights, and a lifetime achievement award for her work in youth development from the Western Cape Department of Social Development.

She’s an alumnus of Stellenbosch University and is currently reading her MPhil in Disability Studies at the University of Cape Town. She’s a chevalier in the French Ordre des Arts et des Lettres (Order of Arts and Letters), and was part of the international jury panel for the Olympic and Paralympic Games in 2012 – the only expert whose first language was not English. She is Afrikaans. She sits on the Presidential Task Team for Disability and served two terms on the Commission for the Promotion and Protection of the Rights of Cultural, Religious and Linguistic Communities.

‘I was fortunate to have grown up in a very musical environment but I was born at the wrong time, in the wrong place. I started to sing in church from the age of five or six, and travelled to the little dorpies with a wonderful guitarist and a pianist who could play by ear. I actually became empowered by being on stage, even though I was performing for farmworkers. They knew if you were good or not – you couldn’t pretend. But I could sing. I had perfect pitch. I can so vividly remember when I was about eight years old, singing a gospel song that guitarist Moos Marthinus had composed for me. At the end, there was dead silence. Then the farmworkers got up and put their last money in a hat for me… It was only later that I realised the magic of music and the arts.’

In Marlene’s private capacity, she established the Wellington Youth Orchestra with the intention to teach musical
skills, instil dignity and restore pride to disadvantaged children in rural areas. She also works with the Stigting vir Bemagtiging deur Afrikaans (Foundation for Empowerment by Afrikaans), which offers reading programmes for mothers, literature programmes for farmworkers and mentorships to equip young people from very poor backgrounds to go to university. In addition, she helps raise awareness around the need for financial support for Friends Day Centre, a special care and activity centre for severely physically and mentally handicapped children and adults in Maitland, where Adam spent some time. ‘In my next life, I want to be a principal in a primary school in a rural, very deprived area, because that’s where you can really make a difference,’ she says.

Meanwhile, through Artscape, Marlene channels some of her seemingly boundless energy into the annual Youth Jazz Festival and High School Drama Festival. The latter features children from 15 schools across the metropolis performing on stage each night and the opening act is always a special needs or rural school. ‘We celebrate South Africa without having any politics involved. That programme is finalised up to 2020,’ says Marlene.

Arts lovers in the outlying areas also benefit through her passion and conviction. She’s the driving force behind a long-running programme that takes theatre to the people.

‘We go to Ceres, Grabouw, Wellington, all over. We take the best opera singers, dancers and musicians, and produce a 90-minute show. Who gets the standing ovation every time? The ballerinas,’ she says. ‘The reason I’m doing it is to dispel the myths… if you’re black, you must like marimbas. If you’re white, you do ballet. It’s about showing people that they have choices we never had.’

Despite her involvement in so many projects, Marlene maintains that we still need to do a lot for the arts. ‘Artscape still needs to transform a lot but sometimes our own egos, perceptions, hurt and bitterness get in the way of where we want to see ourselves. Where I lead, I must make a difference,’ she says.

Does she imagine herself performing again? Marlene says it’s a journey. ‘What I want to do now – especially for my son – is recreational, for myself. When I had Adam, I couldn’t perform anymore. Performing is about giving of yourself and I gave everything to him. I was happy doing that. I was a happy mum for him. Now I’m learning to be. My mother was a wonderful ballroom dancer, and I’m going back to my ballroom dancing and swimming. Both give me a sense of freedom.’ 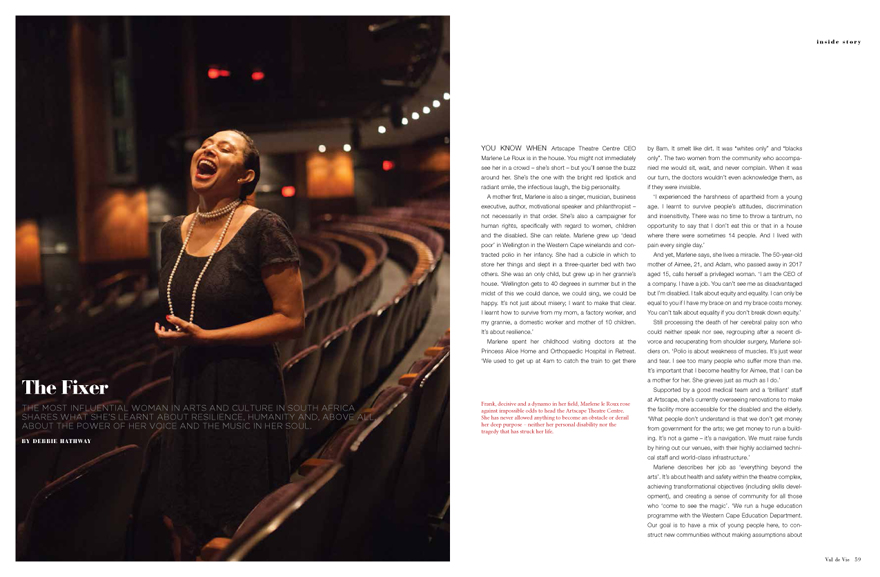 Posted in The Arts, Work
Scroll To Top